The Maddie’s Fund® mission is to revolutionize the status and well-being of companion animals.

Maddie’s Fund® is a family foundation endowed by the founder of Workday® and PeopleSoft, Dave Duffield and his wife, Cheryl. Maddie’s Fund is helping to achieve and sustain a no-kill nation by providing solutions to the most challenging issues facing the animal welfare community through the combined efforts of Maddie’s® Grant Giving, Maddie’s CenterSM (hands-on animal care), and Maddie’s InstituteSM (research and education).

Maddie’s Fund is named after the family’s beloved Miniature Schnauzer who passed away in 1997.

Maddie’s Fund is piloting the subsidy program to give local shelters and rescues the means to find more homes for vulnerable shelter pets, strengthen the relationship between animal control shelters and adoption guarantee groups, and shift some of the burden of responsibility for these pets away from cash-strapped government agencies.

Why Maddie’s Fund is on Ozzies Pound Puppies Site 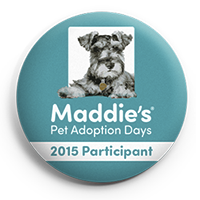